This article is an excerpt from the book called “A Californian’s Guide to the trees among Us” by “Matt Ritter”. This blog post focuses on California’s pine trees and some key factors about them

Pines make up the largest and most economically important genus of conifers.  Their wood is widely used in construction and they are commonly grown as ornamentals.  The nearly 100 species of pines are mostly in the northern hemisphere, with 20 native to California, yet only a small subset of these are commonly  cultivated in the state’s urban and suburban areas. Pines can be distinguished from other conifers by their needle-like leaves that are bundled together into fascicles surrounded by a membranous sheath, ranging from one to five needles per fascicle, depending on the species their winged seeds are formed in pairs in woody cones, on the upper face of the cone scales.

5’ cones persisting on tree for many; years

1’ needles more than 2per bundle

9’ needles mostly less than 6in. long 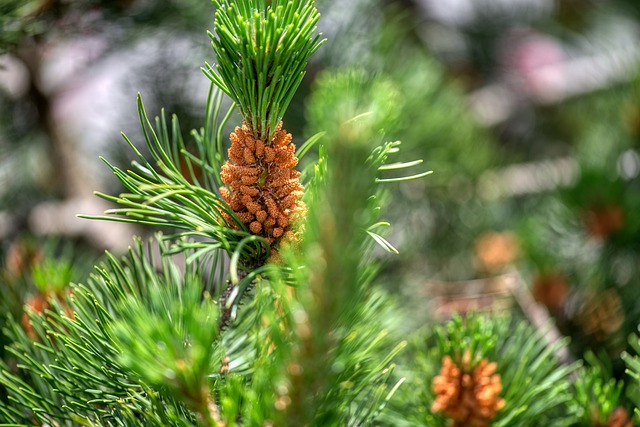 The canary island pine, the most widely cultivated pine in all of California, can be identified by its long graceful needles bundled in thress, its narrowly upright growth, its somewhat pendulous branches, and its rough, deeply fissured, reddish brown bark. The female cones are shiny; ;brown with a blunt projection at the tip of each scale, and the smaller, ephemeral, male cones are responsible for the yellow clouds of allergenic pollen wafting through the air in late sping.  This species has the ability to sprout new shoots from dormant buds under the bark usually after some kind of damage like a fire.  Some cultivated trees produce these bluish gray, waxy juvenile shoots even in the absence of any apparent injury; look for them on the lower trunk.

The  Italian stone pine is the word’s  best known source of pine nuts, which are actually seeds and not nuts a large portion of the world’s culinary pine nuts come from wild and cultivated trees in Italy.  In California, where the Italian stone pine is grown as a street and park tree, pine nuts can be gathered from freshly fallen cones. Pine nts are a wonderfully tasty and nutritious food. A great source of protein, thiamine, phosphorous, iron, and, with aan oil high in by its distinctive, orange-brown, scaly bark, needles bundled in pairs, and characteristically rounded, umbrella –shaped crfown, often with multiple trunks.

The Monterey pine is rare in the wild, occurring only in three isolated stands along the California coast near Cambria, on the Monterey peninsula, and along the coast north of Santa Cruz.  In cultivation, this picturesque pine grows rapidly and is one of california’s most popular large park trees . rapid growth, a straight trunk with few lower branches, and quality wood have made the Monterey pine the most important plantation timber tree in the southern hemisphere. Selectively bred, genetically improved v arieties are extensively planted in Australia, New Zealand, Chile, and South Africa.  The largest cultivated forest in the world is a Monterey pine plantation called the kaingaroa forest on new zealand’s north island. Thisa species is extremely susceptible to pine pitch ;canker a fungal disease many wild and cultivated trees in the state. The Monterey pine can be recognized by its dark green needles that are bundled in threes its light brown, lopsided cones, and its dark gray bark.